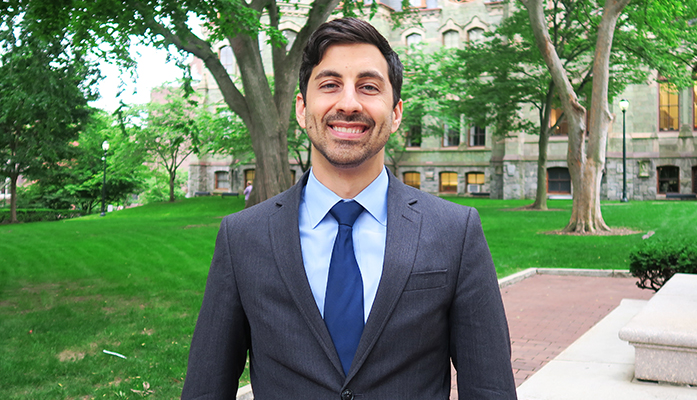 “I love the career I am in now. During my first class in the Master of Environmental Studies (MES) program, I read about sustainability, and the ideas behind ‘people, planet, profit,’ and my head almost exploded. I knew this was it,” shares Dom McGraw (MES ’13), a former IT specialist and current Energy Project Coordinator for the City of Philadelphia’s Energy Office, housed within the Office of Sustainability.

In his role, Dom manages the Energy Efficiency and Sustainability Fund, which supports projects such as reducing energy use in municipal buildings and increasing composting initiatives. His team is currently working on a citywide energy vision as well as Philadelphia’s municipal energy master plan for public buildings. Dom adds, “I’ve been doing a lot with building automation systems. Our office is tying in with the Smart Cities initiatives, which look at how technology can be helpful for energy reduction and sustainability overall.”

One of Dom’s favorite projects was helping Fire Engine 69 in South Philadelphia completely replace its lighting with LED fixtures. “I’m now a huge nerd about occupancy comfort beyond financial savings,” he adds, “It’s a 24/7 building, so the ROI was fast, and the firefighters are happy to work in a brighter space.”

Along with his work for the city, Dom volunteers his time with Philadelphia’s Solid Waste & Recycling Advisory Committee as well as the Philadelphia Food Policy Advisory Council and its Zero Waste subcommittee.

Dom’s thoughtfulness towards environmental health started in his childhood. “I think it was because I watched a lot of Captain Planet,” he laughs, “I used to spend my summers volunteering at the Churchville Nature Center. I was excited to do all of the work the other volunteers were too scared to do—like taking care of the boa constrictor and smoking out the beehives.”

That commitment to eco-friendliness continued throughout his early career. “When I got into IT at Penn Law, I was focused on e-waste and electricity consumption. I made sure all equipment was EnergyStar rated, computers were EPEAT certified and policies to shut down computers at night were enforced.”

By taking advantage of his tuition benefits, Dom transitioned into a career in the environmental field. “What I loved about the MES program was I could take classes in sustainability all around the University—Wharton, Engineering, Design. I love the diversity and customizability that the College of Liberal and Professional Studies was able to give me.”

Earning his MES at Penn not only gave Dom a foundation in energy and sustainability, but it also opened him to professional opportunities. “The program enabled me to network and absolutely helped me to get to where I am now.”