Changing the world, one bar at a time 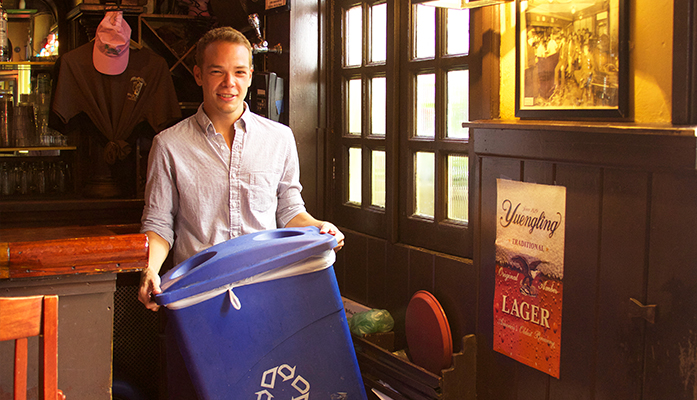 In April 2013, the private Philadelphia consulting firm Niche Recycling invited Penn MES candidate Nathan Sell to help implement a zero waste plan for McGillin’s Olde Ale House. The bar had a problem: too many dumpsters, too close to their main entrance on an alleyway.

Sell saw an opportunity. “If they could eliminate their dumpsters,” Sell said, “they’d become the greenest bar in Philadelphia by Saint Patrick’s Day.”

So Sell began his stakeout of McGillin’s for an entire week, around the clock. He and his team performed a “waste audit,” recording, weighing and separating every single piece of debris that McGillin’s produced. This information would help them extrapolate a new system that seamlessly fit into the bar’s routines. 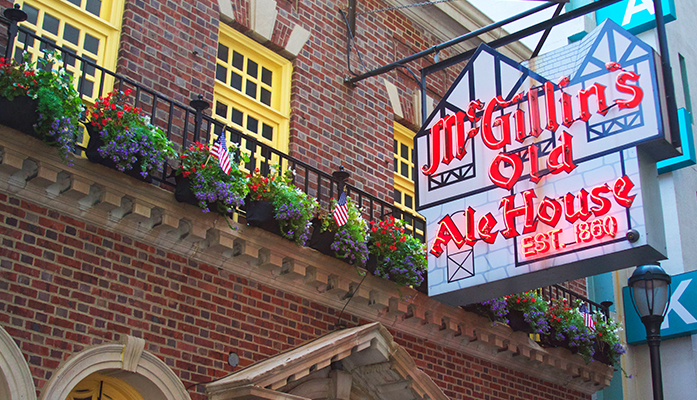 “The project showed me the very real frustrations with reducing waste,” Sell said, “and I may have looked a little strange poking around the trash can at the bar. But the owners and staff were all incredibly enthusiastic and supportive. They pushed our plan even faster than we’d originally recommended.”

With everyone on board, McGillin’s met their zero-waste goal, reducing their landfill contributions by 90 percent.

Through the project, Sell said, “I saw that even a small company like Niche is able to do hefty stuff. You can really make a career out of sustainability.”

From Coral Reefs to Schuylkill Banks

Sell’s journey to the MES program began about as far from a Philadelphia alley as you can imagine: He grew up in the Virgin Islands. There, he witnessed how pollution and poor infrastructure damaged fragile native ecosystems like coral reefs, and decided to study biology in college.

Sell arrived in Philadelphia as a science teacher through Teach For America. He helped his students run a greenhouse and grow their own vegetables. After a few years of teaching, though, Sell said, “I wanted to do the cool environmental stuff I was teaching my kids about.”

The MES program has offered Sell the chance to apply his coursework in practical settings alongside public, private and non-profit professionals. His favorite aspect of the program is its “living laboratory” quality. Through partnerships such as the one with Niche, he is able to implement new ideas in the city he lives in.

Now Sell has turned his focus to stormwater management and green infrastructure on a citywide scale. “That’s what I’m here to learn,” Sell said. “How to make it easy to be green.”