Caring for the Commonwealth’s community trees 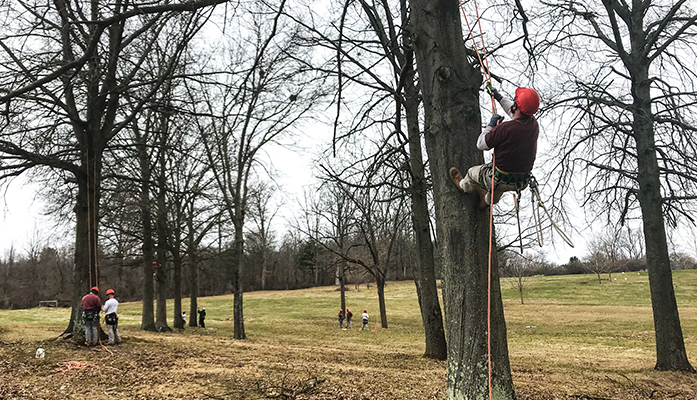 Shea Zwerver (Master of Environmental Studies ’12) wants to teach you the value of your trees. As the Community Engagement and Program Coordinator for Pennsylvania’s Bureau of Forestry, Shea helps deliver arboreal assistance to more than 2,400 municipalities across the state. “We help people better understand trees and their environmental, economic and social benefits,” she explains. Whether coordinating partnerships and outreach communications from her Harrisburg office or helping communities build sustainable urban forestry programs, Shea draws on the diverse studies she undertook in Penn’s Master of Environmental Studies program. “I was able to create my own curriculum according to what interested me,” she reflects. “I’ve worked in the nonprofit and private sectors, and I work for a government agency now. The program’s liberal arts approach prepared me to be pretty versatile in each of my roles.”

Working in a state-wide role keeps Shea on the move: she travels to some corner of the Commonwealth every week to give talks, facilitate trainings and catalog tree health and diversity across the state. Last summer, Shea organized multiple Pennsylvania Outdoor Corps crews who inventoried more than 12,000 trees across 11 Pennsylvania communities. “I was out with a small crew in Harrisburg for three weeks, just walking up and down every street,” she recalls. While forests in Pennsylvania’s urban centers are frequently supported by nonprofits like the Pennsylvania Horticultural Society in Philadelphia and the Western Pennsylvania Conservancy in Pittsburgh, Shea says, smaller municipalities may not have the budget or personnel to properly care for their forest resources. “We recently analyzed the historical distribution of our tree planting grants across the Commonwealth,” she adds. “We want to make sure we’re being equitable and not exacerbating environmental inequality through tree plantings.”

One of Shea’s programs neatly dovetails the Department of Conservation and Natural Resources’ commitment to supporting vulnerable populations and cultivating a diverse conservation workforce: a vocational training program in arboriculture for inmates nearing release. The program was first piloted in late 2017 at SCI Rockview’s Forestry Camp, where inmates are already carrying out forest management activities on the roughly 2,500 acres of woodlands and six-acre tree nursery that surround the facility. Shea’s arboriculture training program pulls professionals and scholars from the public and private sectors to provide more than 30 hours of training in topics such as tree biology, fertilization, water management, pruning, and climbing safety. Shea designed the course and implemented it in collaboration with the Pennsylvania Department of Corrections, Penn State Extension and support from the International Society for Arboriculture, which donated copies of its Arborist Certification Study Guidebook to prepare trainees for the Arborist Certification exam.

Candidates for Arborist Certification need three years of experience; now in its second year, Shea’s correctional-conservation collaboration has not yet seen its alumni qualify, but their intensive education positions reentrants to continue accruing hours of experience in well-compensated arboriculture jobs. Shea recounts the story of a student who was hired on by one of the largest tree care companies in the US only two weeks after his release. “He’s already been promoted from a groundsman to foreman, and it hasn’t even been a year,” she says with pride. “He doesn’t have his certification yet, but he has the knowledge, and there’s such a high demand for the work.”