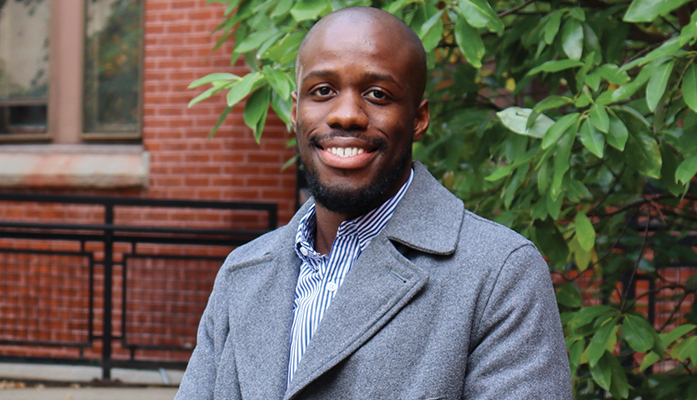 When Gee Paegar (MES ’18) began the Master in Environmental Studies program at Penn, he did not have a specific career path in mind. “I just knew I wanted to work in environmental governance and policy and make a difference in people’s lives,” he recalls. His interest in sustainability is grounded in personal experience. Growing up in Liberia, he observed the environmental degradation caused by the country’s civil war.

The multidisciplinary nature of Penn’s program engaged his broad interests and led him to discover academic passions he did not anticipate. “I took a risk management class my first semester and was enthralled,” he laughs. As Gee followed his intellectual curiosity across departments, his purpose came into view. “I realized I was really interested in energy efficiency, environmental health, and environmental justice—and especially, all the fascinating ways that they are linked,” he says. “For example, many energy efficiency measures also result in improved indoor air quality. And sometimes there are health and safety issues that need to be resolved before you can, say, insulate a home. Otherwise, you would exacerbate the problems.”

In the summer after his first semester, Gee joined a student- and faculty-led project to reduce lead exposure across southeastern Pennsylvania. Funded by a Making a Difference in Diverse Communities grant from the University, they worked with municipal governments, schools, and community groups, enhancing efforts to replace service lines and educate the public. “I loved every aspect of that project,” he says. “And it provided a window into the opportunities that exist in the utility sector for MES graduates.”

Now, Gee works as an Energy Efficiency Program Analyst at Philadelphia Gas Works, where he manages rebates and grants that incentivize customers to install high-efficiency equipment. “This position allows me to combine all of the different things I studied,” he notes. “I even get to draw upon my architecture background when reviewing construction grant projects.” (He began his undergraduate studies in architecture, before switching to environmental sustainability.)

Gee says that his experience in the MES program prepared him well for the role. “There is a lot of overlap between what I do now and what I studied at Penn,” he says. “Our professors wanted us to be equipped for real work, which I appreciate.” Another thing he appreciates: the ability to effect broad-scale change through his vocation. “People might not understand the impact these measures have, but they really do lower emissions significantly and save customers money.”