Portrait of the farmer as a young woman 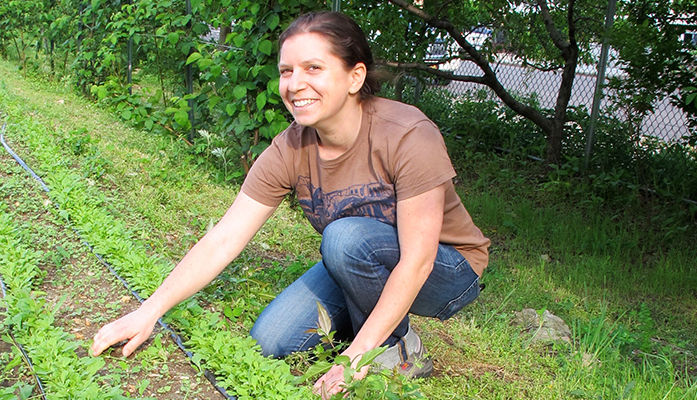 You might think it would be hard for a farmer to play favorites among vegetables. But Johanna Rosen (Master of Environmental Studies ’13), co-founder of Mill Creek Urban Farm in West Philadelphia, has no hesitations.

“I love okra. It’s so tall and striking,” Johanna says. “A lot of people in the neighborhood grew up in the south and are used to eating it fresh, and Mill Creek sells out at every market.”

Providing that connection to nourishing local produce is exactly why Johanna began Mill Creek, an urban educational farm, over eight years ago. But she’s had a passion for farming and gardening since she was in high school.

“In high school, one of my friends worked on a farm and got me into it. At first, just the opportunity to do physical work outside was compelling, and then when I learned more about the political implications of growing food locally, I became committed to the work mentally and intellectually,” she says.

As an undergraduate at Smith College, Johanna’s interest in farming led her to create her own major, which she called “Political Economy of the Environment,” combining the social and natural sciences to study the social justice implications of agriculture. The urban farming movement was not exactly the hot topic it is today.

“Now they have a major that deals with food and farming, but at the time, it was not supported by the college,” Johanna says. “The experience of deciding what I wanted to do and having to defend that decision was really formative.”

Johanna took that newfound determination into the Americorps program. She had been farming every summer, and applied her experiences at the Urban Nutrition Initiative at University City High School. For four years, she taught cooking and gardening classes to Philadelphia teens. Then one day, she heard through the grapevine about a parcel of land owned by the City Redevelopment Authority.

With a friend, Johanna applied to use the land to start a farm. They won the contract, and Mill Creek Urban Farm was born. 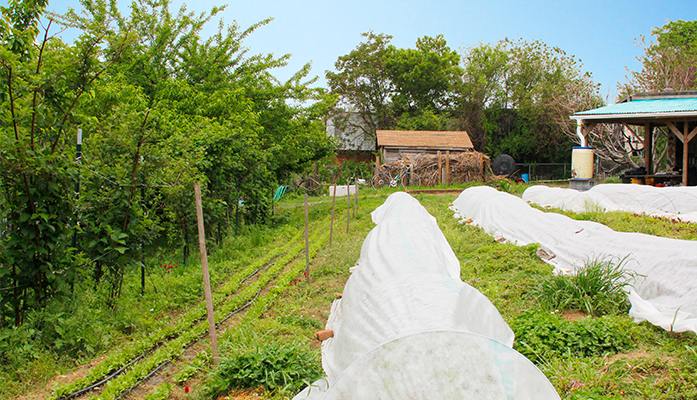 At the farm, they grew dozens of varieties of vegetables, and hosted students of all ages to visit and work at the first farm that many of them had ever seen, much less been able to walk to from their own homes. Most of the food grown was sold directly to the neighborhood, providing a much-needed source of affordable, fresh produce.

As the farm grew into a treasured local resource, Johanna began thinking about her next steps.

“We didn’t want the farm to be founder-led for too long,” she says. “I wanted a master’s degree to help keep my options open.”

Johanna was introduced to Penn’s MES program through some professors that she collaborated with professionally, and chose to apply because of the program’s prestige, practicality and flexibility . “I saw that I could explore different topics while deciding exactly what I wanted to do—much like creating my own major as an undergraduate,” Johanna says. “And once in the program, I very quickly gravitated to my subject of interest: land preservation.”

Johanna learned about land trusts, easements and other intricacies of land policy, and took courses in GIS at the Design School. She took a few extra classes and was able to complete a certificate in Land Preservation in addition to her master's degree.

“The degree felt very practical,” Johanna says.  “I was able to earn a certificate in issues of land preservation and the urban environment to address the land tenure questions we’d confronted at the farm. For my capstone project, I examined the larger context of land use and tried to make a case for preserving the land that Mill Creek is on as farmland. I was able to articulate how preserving land as open space links back to the food system and adds an element of social justice.”

Once Johanna completed her degree, she began her transition out of leadership at Mill Creek and began to look for other jobs. The focus on land preservation that she’d found in the MES program led her to her current employment at the Equity Trust, a non-profit in Massachusetts.

“The degree led very directly to the work I’m doing now,” she says. “The Equity Trust hired me because of my background and education, my direct experience and my networks.”

At her job, Johanna is working to preserve land tenure for urban agriculture.

“Urban farming is good work but not secure, because land is basis for the work, and securing use of the land can be tricky. My job is to help farmers get more security so they can invest in infrastructure and relationships,” Johanna says. “Space is critical to making these investments, which in turn are necessary to help these organizations grow.”

While Johanna still makes time to work on a farm part-time, she believes her work at the Equity Trust is securing the ability of young farmers like her to expand their work in the years to come. “I’m excited about getting to keep people who are in similar situations to mine at Mill Creek,” she says, “and helping their work have the long-term impact it deserves.”