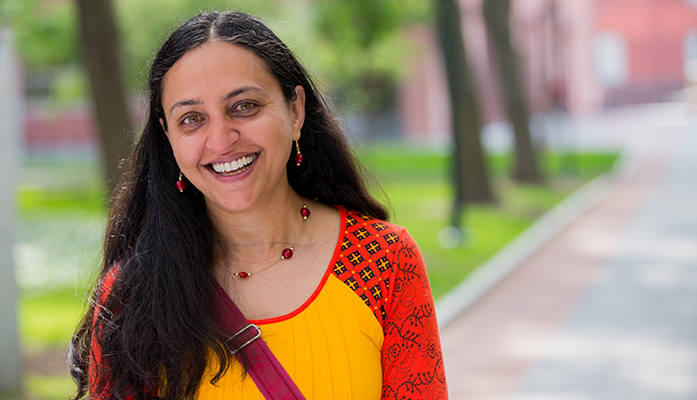 A software engineer ventures into the unknown and finds her passion

A successful software engineer, Nidhi had completed her master’s degree in computer science, learned from the best at a big software company and an internet startup, and founded her own tech consulting company. At the end of another “massive project,” she says, she should have had a sense of fulfillment.

“Instead, I found myself waking up, thinking, is what’s next more of the same? Is this what I have to look forward to?”

An engineer at heart, Nidhi is nothing if not methodical. “If you’re going to change something, you have to make a practical, responsible choice!” Nidhi laughs. “I’m not spontaneous. So I began to carefully explore my options.”

Which brings us to the three doors.

“My choices were: door number one, stay in the tech world but change my business model to cure burnout; door number two, apply technology a slightly different way or take on different projects; or, door number three, pursue a completely new career or thing to do with my life. I knew that door was there, but I didn’t know yet what was behind it.”

When she asked herself what activities most brought her satisfaction—“what made me smile?” — she realized that protecting the environment had been a core personal value for her whole life.

“I was that weirdo friend drying my clothes on the line and not using a dishwasher. I had always devoured literature on the subject. And I saw—ah-ha!—this is something that’s really important and meaningful to me.”

It seemed like door number three was beckoning after all. Then, as Nidhi contemplated what to do with this insight, fate (and public radio) intervened.

“I was sitting there and an ad on NPR came on, asking, “Are you interested in addressing environmental issues? Don’t know where to start? And it was for the Master of Environmental Studies program. I bolted out of my chair. Here is a path! I started researching and knew this is where I wanted to start the journey into my new life.”

Once enrolled, Nidhi found the sustainability concentration most resonated with her personal values and approach to the environment.

“To tell people not to develop is not going to happen. I’m interested in how we change the way we’re developing to manage our resources better. All these touch points need to be changed—pollution, resources. It’s a huge challenge, and that’s what I love about it.”

She also felt inspired by the breadth of options her courses offered her.

“Software is a binary world,” she says. “If you want to develop a solution, there’s a right and wrong way. But here the work could be done in a billion different ways, and nobody will tell you how it should be done. It broadened my horizon hugely.”

When it came time to choose a capstone topic, she once again felt drawn to the tech world, but this time from a different angle. As someone who understood the many gifts of technology, she wanted to examine the darker side of e-waste on our ecosystems.

“I settled on mobile phones because they’re unique in terms of waste,” Nidhi says. “Mobile phones are typically replaced in 12- to 18-month cycles. They generate a lot more waste.”

Not only do you replace your phone more often, but unlike a TV or computer, it’s very easy to discard your cell phone.

“Because it’s so small, you’ll tuck an old phone away in a corner and forget about it or toss it in the trash,” says Nidhi. “The recycling rate is eight to 10 percent, which is horrendous, especially when you consider they’re consumed in the hundreds of millions of units. Last year, Apple’s first quarter performance—the most profitable quarter of any company in history—was driven by iPhones: 34,000 were purchased every hour, every day, for the financial quarter.”

The impact of that consumption is staggering, according to Nidhi. “Think about an eight percent recycling rate. That’s a lot of waste that includes heavy metals. Metals don’t degrade but accumulate in the environment—in fish, plants, soil and air.”

The other reason recycling is important, besides preventing waste and environmental contamination, she says, is because mobile phones, even used ones, are an incredibly valuable resource.

“Old phones are this golden product. If we recycled, we could close that resource loop instead of constantly extracting. And modern recycling facilities can extract up to 90% of the copper, gold and other metals in the phones. Unlike paper recycling, you’re not downcycling—it’s just as useful as when it went into the resource streams.”

Nidhi carried out research into why the recycling rate was so low and came up with two key findings.

“The two primary factors in driving recycling behavior are knowledge and convenience. Without either it doesn’t work, and currently people have neither the education nor the access to phone recycling. So they don’t know how to do it, and it’s a pain to do. Money is a factor because phones are considered valuable products and people have the perception they’re worth something; but I found that even if you offered someone money to recycle, those first two factors always trump it.”

Although Nidhi graduated in May, she continues to pursue the topic of mobile phone waste—because of our extremely high consumption rates, she says, any change at all would have a large impact.

She is also enjoying her current post, an internship with an international sustainability consulting company. “I’m exploring questions like, what does it mean to implement environmental impact programs? What are the challenges in actually putting it into place? I’m looking forward to seeing where it takes me.”

If that sounds a lot different than her previous binary world, it is. “There is uncertainty. I went from a very well defined path to a totally different world. But it has been a journey of incredible knowledge. It opened my mind, it opened my world, and it was fantastic. It was not easy, but I have no regrets.”

To hear more from Nidhi, visit her blog, “The Ahimsa Experiment.”