Getting in the reeds with energy and ecology 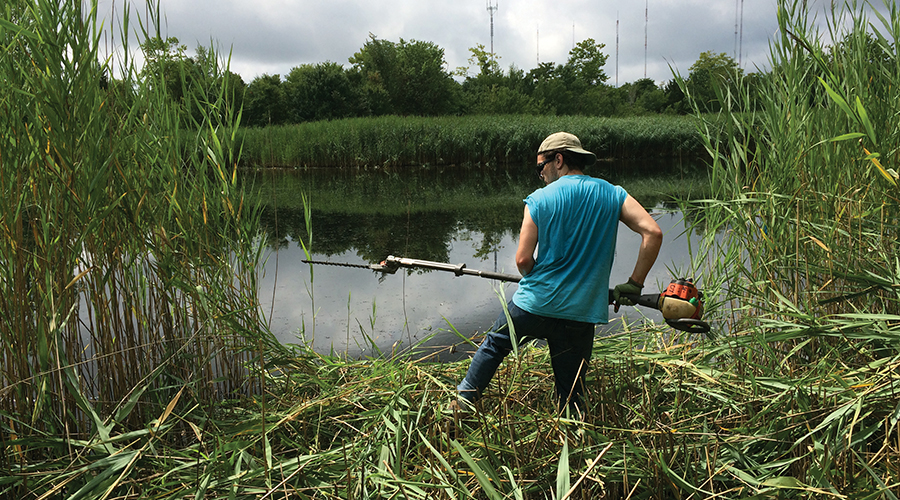 “I was always a science guy growing up. What I loved about biology is how plants and animals interact with each other,” recalls Peter Lewis (Master of Environmental Studies `19), who majored in biology as an undergraduate. After college he worked in a cancer research center, and realized he wanted to do something more hands-on and more relevant to his interest in ecology. “I landed on the Master of Environmental Studies program because I wanted to do something to help the environment, and felt like the practical, applied focus of the MES program worked for me,” he says.

At Penn, Peter pursued a degree concentration in environmental biology, taking courses in field botany and field ecology—including one that culminated in a week of fieldwork in Puerto Rico. During the summer after his first year, Peter’s advisor connected him with an ecologist who wanted to revitalize the Roxborough Reservoir Preserve. The abandoned reservoir had built up a layer of sediment since being decommissioned, and the man-made basin is now a habitat for plant and animal species—including Phragmites, an invasive reed that tends to dominate struggling ecosystems like the reservoir. Peter spent a summer cutting back Phragmites and then monitoring them over the next few months to see how different methods, like covering the beds with a tarp or changing the depth of the water, had impacted the reed’s ability to grow back. “I was really into ecosystem restoration, and the project was centered on rehabilitating that park, so it had the ecology angle to it,” says Peter, adding, “I think people don’t really know the best way of handling invasive species; it’s still an open question. Maybe there is a better way to coexist with them as well.” Peter submitted his project in the reservoir preserve as his capstone project for the degree, and gave his findings to the Friends of the Upper Roxborough Reservoir Preserve.

In his second year in the program, Peter took advantage of the option to take courses across the University, enrolling in Stuart Weitzman School of Design offerings in city planning and landscape architecture. He was partly inspired, he says, by his peers: “It really does help to network. I know everyone says that, but it’s true—and Penn has a huge network. It’s good to ask your advisor, your professors, or even other students to introduce you to people,” he says. “I was interacting with a lot of people who were doing all different things, and I realized that there is a lot that didn’t fit squarely into the environmental bio field. So, I explored.” Taking courses in city planning helped Peter identify an interest in urban applications of environmental studies—and when a classmate connected him with a job opportunity at a local utility company, he was ready to try something new.

Currently an Energy Efficiency Analyst for Philadelphia Gas Works, Peter works with a program that helps low-income customers reduce their energy usage by addressing equipment or building issues: sealing holes, installing insulation, putting in new thermostats, and so on. “There’s a pragmatic angle to it, but there’s also the altruistic angle of making people’s houses more comfortable and cutting down on the amount they pay,” he explains. Analyzing customer data for anomalies may seem like a far cry from pulling up tenacious reeds, but Peter enjoys the work—he recently completed a Penn LPS Online Certificate in Data Analytics, which helped him bridge his environmental education and his new data-driven professional path. In addition, his environmental background has made him a flexible thinker and problem-solver at work. “My experience is a little different from everyone else on my team,” he reflects. “Because I went through the MES program, I have a pretty broad knowledge base when it comes to energy and sustainability. The building science aspect was something I had to pick up on the job, but everything else extrapolated over pretty well—and I’m able to use lateral thinking and bring in ideas that might not seem related.”

“Keep an open mind,” Peter advises prospective MES students. “For a while I had a narrower focus, and then I realized there are a lot of things I could do that would be cool and interesting. I’m in a headspace where I’d like to experiment. I’d still like to branch out.”