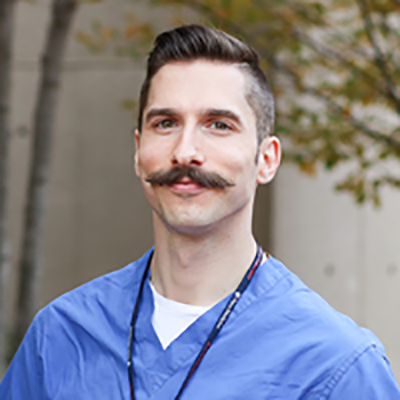 As the child of two veterinarians, Bradford Morris (Pre-Health Core Studies ‘19) spent weekends with animals in his parents’ care. Medicine would have been an obvious career choice, which may be why he initially went in a different direction, studying visual art, math, and education before deciding to enroll in Penn’s Pre-Health Core Studies Program.

In Bradford’s former life as a high school math teacher in New Orleans, he co-led his school’s peer mediation program and came to identify with the healing role that teachers can play for students and communities. He recognized that studying medicine would allow him to step into that role more fully while also satisfying his need for constant challenge and growth for years to come. With both of his triplet sisters already in medicine and his own feeling of autonomy more established, he decided to enter the field as well.

Since Bradford had not taken many science classes as an undergraduate, he enrolled in Penn’s Pre-Health Core Studies Program to fill in the gaps. Students can choose to complete the Core Studies program part-time in two years, or full-time in one, as Bradford did. “Some people are great at balancing work and school, but I’ve always preferred to focus on one thing at a time and apply myself to it 110%.” He admits it was an intense year, noting, with a laugh, “I spent so much time in the library that my phone asked me if I wanted to set it as my ‘Home.’” Still, he feels that it was the right choice for him.

In addition to his courses, Bradford also took part in the Pre-Health Journal Club at Penn, which he recommends to all current and future Pre-Health students. “The ability to read and present scientific literature is an invaluable skill that will serve you for your entire career, and it also makes the MCAT less intimidating,” he says.

Bradford was nominated for linkage to Perelman School of Medicine at the University of Pennsylvania and will start there in fall 2020 pending admission. In the meantime, with his coursework completed, he is employed as a clinical research assistant with two different programs: Penn Acute Research Collaboration (PARC), and the Eating Disorder Treatment Program at the Children’s Hospital of Philadelphia. Through Penn’s Academic Associate Program, Bradford is also engaged in research at the Emergency Department of the Hospital of the University of Pennsylvania. In his free time, he volunteers at Penn Medicine Hospice, supporting patients and families from the West Philadelphia community.

Bradford is leaning toward specializing in psychiatry, in part because “if you are going to see any specialty in medicine completely transformed by the time you leave your career, psych is the one.” Reflecting on his experience in the Pre-Health Program and the opportunities it has opened, he says, “It’s been so positive. I’m really excited; this is 100% what I want to do.”