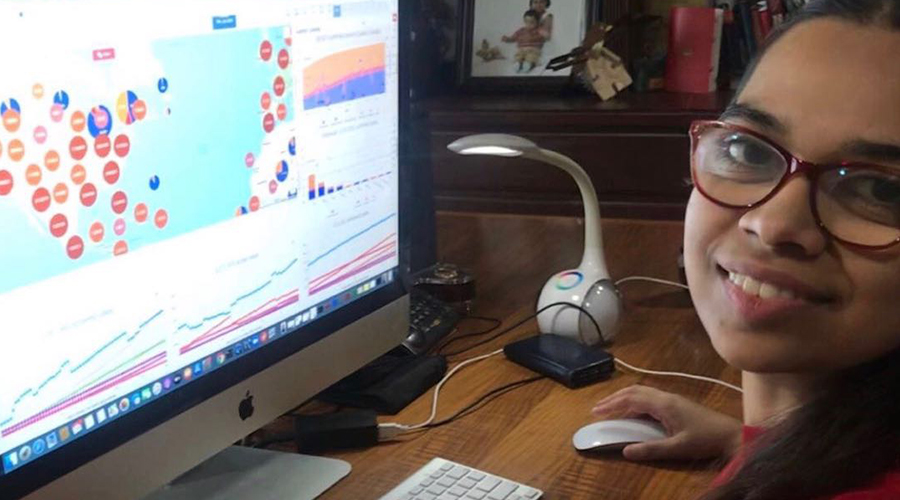 “During a time of social unrest, there’s a lot of misinformation, injustice, and frightful things going on,” writes Neelofar Tamboli, a senior at Princeton International School of Mathematics and Science and an alumna of the Penn Summer High School Program’s Social Justice Research Academy (SJRA). “SJRA taught me that in order to make a difference, having the right information and knowledge is key to making informed decisions rather than abrupt, uninformed opinions.”

These words accompany the results of Neelofar’s research: a website featuring maps and charts visualizing and comparing coronavirus data, which she began developing prior to the summer program but focused and expanded during conversations with faculty, mentors, and peers at Penn.

Along the top of the homepage, there are dates which users can scroll through; Neelofar updates these weekly, or more often if her study and extracurricular schedule allows. Below the dates there is a map of the world, dotted with colorful bubbles displaying the number of cases in different regions. Clicking on any of these allows users to zoom in on a particular region and see a more detailed pie chart comparing active coronavirus cases to the number of recovered patients and deaths. The data comes from the COVID-19 data repository on GitHub, which is maintained by Johns Hopkins University. Neelofar says that the idea for collating this information came to her in March, when her proposed senior project was stalled by the stay-at-home order—and because she wondered how the rapidly-spreading pandemic would affect her community in Plainsboro, New Jersey. “I thought, before starting this journey, that I can’t change anything or contribute,” she reflects. “That’s why I wanted to work on something like a map that everybody can look at, everybody can see and visually understand what’s going on.” She had the website up by the end of April.

Princeton International School of Mathematics and Science is a boarding school, and Neelofar’s classmates come from all over the globe—including China, so she learned early on from her peers about lockdowns in China, and joined some classmates in forming a group called the Silver Lining Team to coordinate donations of masks, gloves, and isolation gowns. As the United States went into lockdown and Neelofar continued developing her map, she couldn’t help but notice differences in the case rates and recovery rates for the two countries—which prompted her to create line graphs comparing active, recovered, and deceased cases in countries around the world. “I thought the United States would at least take some kind of measures to slow down the spread of the virus,” she reflects. “I guess we didn’t.”

By summer, Neelofar had begun to notice the ways coronavirus affected some communities more severely than others, and also followed news coverage of Black Lives Matter protests across the nation. She also found herself with some free time, and came across the Social Justice Research Academy as she looked for ways to fill it. “SJRA was talking about all the issues, all the protests, all the racism and social justice issues—and I wanted to be a part of that,” she recalls. “I want to learn as much as I can and see if I can make something that will be of use to people, not only about how many cases or deaths there are, but rather seeing how different races are affected by COVID-19 differently.”

Through the Social Justice Research Academy, Neelofar talked over her ideas with instructors, librarians, and mentors who were able to connect her to tools and talk through the relationship of the charts and maps on her website. She cross-referenced racial demographics in affected regions with the case rate and death rate data, and produced a chart showing that there is a positive correlation between Black communities and coronavirus deaths. “One message that I want the world to acknowledge is that certain communities are being disproportionately affected,” says Neelofar. “If we don’t change the way our current healthcare system responds to those communities, then we’re not caring for everybody.”

Beyond the personalized guidance for her coronavirus map program, Neelofar also valued learning about many aspects of social justice, particularly from guest lecturers who worked in areas from critical race studies to restorative justice to faith communities. She also enjoyed meeting with her mentor in a small group, in which a different student would lead an icebreaker activity. In the summer of 2020, the students were logging in from various locations to hold these icebreakers online, but to Neelofar, the group was friendly and warm. “On the first day, our mentor said that you can speak openly in this area— and even the kids there were so welcoming. Everybody gives their input and everybody reflects on the lectures, and that was really valuable to me,” she says. “If I could go back and do those three weeks all over again, I would do them one hundred million times.”

Now in her senior year of high school, Neelofar is applying to college and considering a major in sociology. “My first interest was engineering. There’s a lot of things that engineers can do for the world by creating,” she says. “But slowly my interest shifted to sociology, maybe sparked by everything that’s happened so far in the pandemic.” She has also brought her social justice studies back to school by founding the Racial Injustice and Pandemic school club. “The social justice program completely opened my eyes on so many different issues, and I realized that even I can make a change, even if it’s a small change,” she says. “Rather than just science or math research, I want students in my school to do research on a subject in social injustice or sociology, or research on how different communities interact with each other. I want to give other students the opportunity to do whatever their mind wants.”

Neelofar’s coronavirus map project continues to provide a rich canvas for her to explore different aspects of comparing and communicating data. She plans to create a video to feature all the projects created by her fellow members of the Racial Injustice and Pandemic school club, and she’s also interested in adding contextual content to the map. “I’m still working on a part of the map where you can click on each state and find different news stories related to COVID-19, racism, and the protests,” she says. For example, when the Silver Lining Team coordinated mask donations in March and April, she looked not only at her map data but at news reportages to determine which communities needed them most, particularly in nearby New York hospitals which were hit hardest in the early days. “If I go to New Jersey and click on the map, I would want to know what kind of injustices are happening in that area,” she muses. “Then we as a community can realize this, and stop it from happening in the first place.”

“If I could speak to world leaders, I would tell them to start caring about communities and people who don’t have access to proper healthcare or sanitary conditions,” adds Neelofar. “The data is obvious. It’s there.”