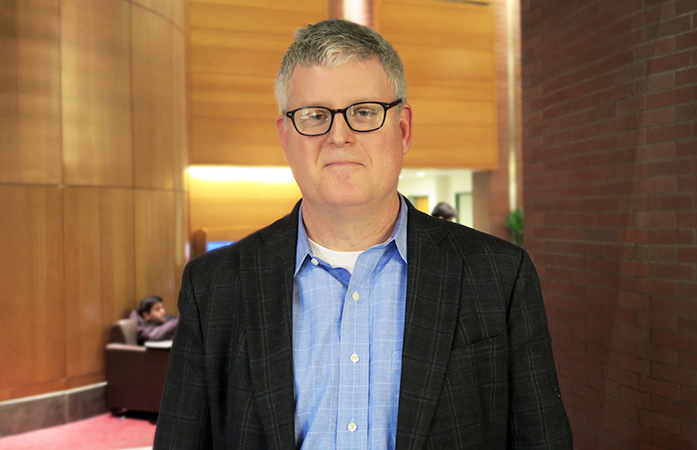 “The municipality of Toms River, New Jersey has received more federal flood insurance claims paid dollars than 38 entire states, including California,” shares John Miller, a Master of Environmental Studies (MES ’17—expected) student and current fellow in New Jersey Senator Bob Menendez’s Office. “When Hurricane Sandy came along, it dramatically changed my career as an engineer. I had already been working with the NJ legislature and municipalities pushing the idea that the state needs to take preventative flood measures. I started getting more interested in the bigger picture—funding, land use, policy, etc. So, at 46 years of age, I came back to school full-time.”

Under the advisement of Dr. Howard Kunreuther at the Wharton School, John took on two semesters of independent study for his MES degree. In the summer of 2016, John was an intern in the White House Office of Management and Budget where he worked on President Obama’s Climate Action Plan. During that assignment, John helped to implement Executive Order 13690, an update to Executive Order 11988—further reinforcing agency floodplain management rules and guidance in adopting the Federal Flood Risk Management Standard.

In January 2017, John started on the “other side of Pennsylvania Avenue” for his fellowship with Senator Menendez’s Office. “I went from the executive to the legislative branch of our government—and did so amidst a transition of administrations,” he reflects, “There’s a big power shift and every day feels like I’m living history.”

To inform Senator Menendez’s Office on flood risk and reauthorization of the National Flood Insurance Program (NFIP), John uses his 23 years of engineering experience in water resource management as well as best practices learned in the classroom and counsel from Dr. Kunreuther at Penn.

John explains, “Reauthorization of the NFIP is complicated, and there is a range of opinions on where the program should go. That doesn’t dissuade me from trying to educate and be open to reform considerations,” he continues, “Ultimately I am an advisor in this position, and the Senate and House members are going to make the call. I’m okay with that. It means you have to get your point across well, and that’s where Penn comes in—regarding my ability to tell a story, do research and present ideas so someone has a full understanding and can make a decision based on the information I provide.” 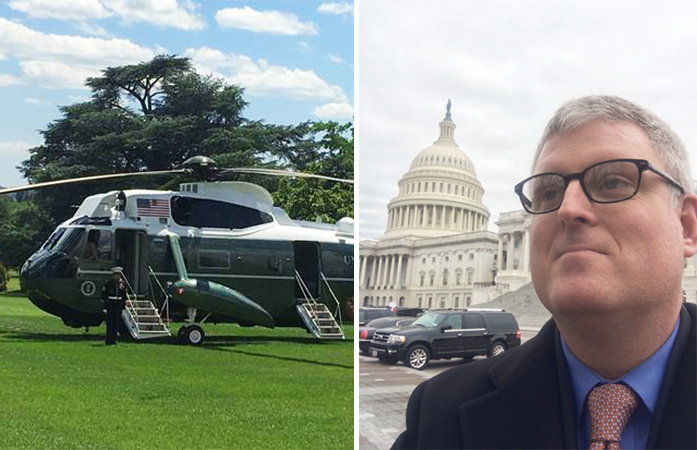 During his time in the Senator’s D.C. Office, John also witnessed the recent influx of citizen engagement. “As for the public, you are being heard. The volume of calls and the opinions of constituents are deservingly getting attention.”

Looking ahead, John is writing a paper that will be employed in real time for his D.C. fellowship. “That’s what’s exciting to me. That’s why I came to the MES program in the College of Liberal and Professional Studies. I like to get out there and influence the process.”

For his independent study, John is making recommendations for how the NFIP, a $1.2 trillion program, can sustainably operate with the current push to privatize flood insurance. He expands, “It’s not just a flood insurance program, it’s standards—how we build. It’s mitigation—how we reduce risk. It’s mapping—depicting risk for developing the land. Careful thought must dictate a move to privatization, as private insurers could snatch up all of the lowest risk policies leaving the NFIP as the insurance of last resort and costing taxpayers.”

Facing hostility to rules labeled as “environmental protections,” first in New Jersey by the state administration and special interests, and more recently in this new presidential administration, has challenged John to adapt his messaging. To drive his points to the public and decision-makers, John positions flood management as public safety and economic issues.

“We have lost lives in flooding. Resilience means that businesses are back in business quicker after a disaster. People are back in their homes and utilities are up and running. People are back to work, and fewer people are in danger of being physically hurt. There’s a lot of mental pain caused by floods as well. A lot of families never fully recover because they’ve lost their biggest investment and most valuable possessions,” John concludes, “If we can reduce our vulnerability, then it’s better for public safety, building safety and for our local, state and national economies. That’s why rules are put in place.”